The John James Audubon Bridge was recently selected as the Editor’s Choice/Transportation for ENR’s Best of the Best Projects for 2012.  The annual competition culminated in honoring ENR’s selection of the most outstanding construction projects in the U.s. And Puerto Rico complete between July 2011 and June 2012.

Nearly 1,000 project teams submitted their best work to ENR’s regional "Best Projects" competitions. For each of the nine regions, our editors assembled an independent panel of industry judges to home in on the winners in 19 categories. The winners of the regional contests moved on to the national competition. A different set of industry judges examined the projects to distinguish the "Best of the Best" in teamwork, success in overcoming challenges, innovation and quality. This year, a new award honors the safest project, judged by industry safety experts in both the regional and national competitions. Also, ENR’s editorial staff chose one special project as the "Editors’ Choice" to represent the pinnacle of design and construction excellence.

The Audubon Bridge won the Editor’s Choice – the editorial staff’s selection of the “pinnacle of design and construction excellence”.  Congratulations to everyone at Audubon Bridge Constructors (Flatiron, Granite and Parsons), Louisiana DOTD, and all who worked on the project!

Regular readers of our blog will be very familiar with the JJA as we often called it.   You can catch all of the geotechnical and foundation highlights on our project page, or check out previous posts. 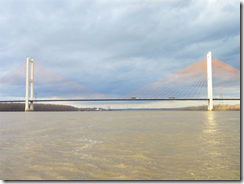 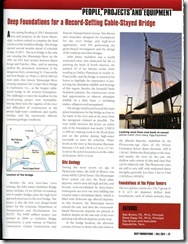 Dan and Steve co-authored an article in the Fall 2011 issue of Deep Foundations (from DFI) that covered the foundations for the recently completed record-setting Audubon Bridge in Louisiana.  Dan and Steve cover not only the shaft testing, design, and construction, but also the unique cofferdam used for the tower foundations.  I recently highlighted an article by Sereno Brown, P.E. of Flatiron that covered the design and installation of the cofferdam in detail.

You can receive Deep Foundations every quarter (soon bi-monthly!), as well as the DFI Journal, by joining DFI.  Get information on joining at this link – click on “Membership” at the top banner. 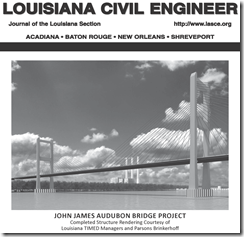 As noted earlier on this blog, the Audubon Bridge opened a little bit earlier than planned.  Although over a year old, an article recently came to my attention that puts a spotlight on the unique engineering and construction that went into the cofferdams for the two main bridge piers in the Mississippi River.  The article is “John James Audubon Bridge Project – Cofferdam Construction for the Main Span Pier Foundations”, published in the February 2010 issue of Louisiana Civil Engineer, the Journal of the Louisiana Section of the American Society of Civil Engineers.

The John James Audubon Bridge was opened to traffic on May 10, 2011 a little earlier than planned.  While the project is not 100% complete, the bridge was sufficiently complete to allow an emergency opening due to closure of the nearby ferry the bridge is replacing.  From the project website:

Due to the high level of the Mississippi River causing the closure of the New Roads/St. Francisville ferry, the Louisiana Department of Transportation and Development (DOTD) opened the John James Audubon Bridge at 10 a.m. on Thursday, May 5, 2011. This emergency opening allowed continuous river-crossing access for traffic affected by the ferry closure. The ferry, which carried approximately 720 vehicles per day according to 2009-2010 DOTD statistics, is permanently closed with the opening of the Audubon Bridge.

Construction is still ongoing and could affect traffic until the project is 100% complete later this year. 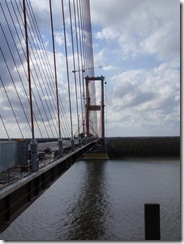 I have uploaded the presentation Steve gave at Geo-Florida 2010 on February 24th.  You can find it on our Presentations page or by clicking the image below.  Enjoy! 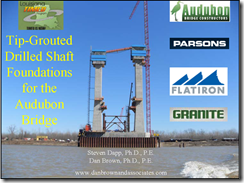 It has been a little while since we last visited the John James Audubon Bridge site in New roads, Louisiana.  My how things have changed!  I just have a couple of pictures of the piers from January – it is really looking like a bridge now!  For frequent updates, check out the webcam and the photo albums on the project web page.  The web cams have a really cool time lapse button that shows you a time lapse loop of the pier from the beginning of construction.

UPDATE (2/28/10) – I added 3 new photos to the slide show that were taken this last week. At that time the piers were at lift 21 and were about elevation +335 feet (the top of the sheet piles at the foundation level are about elevation +50 feet).