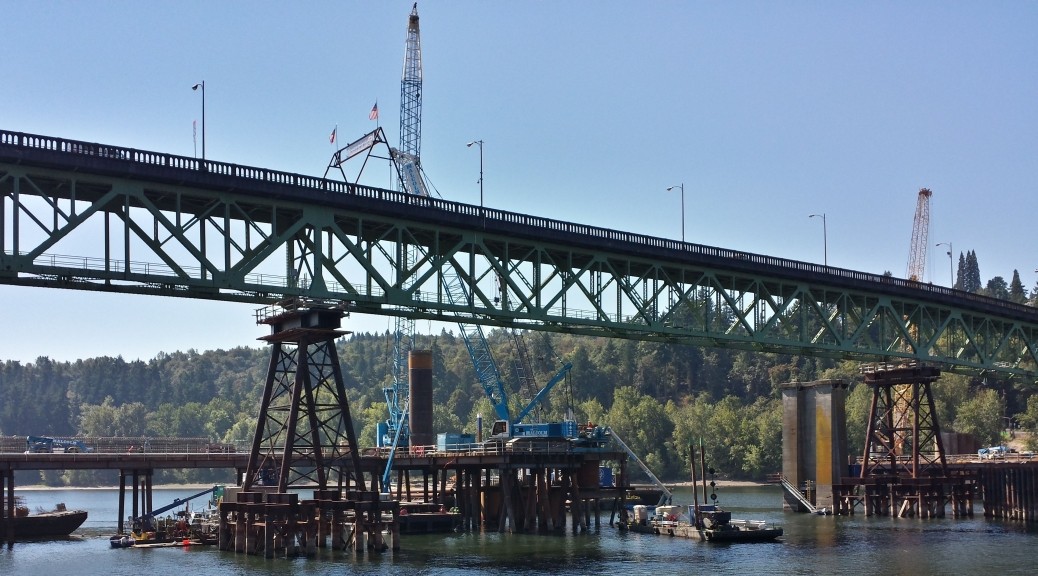 DBA has had the pleasure of working with T.Y. Lin and Slayden–Sundt JV in their effort to replace the Sellwood Bridge over the Willamette River in Multnomah County, Oregon, near Portland. Designed by Gustav Lindenthal, the existing Sellwood Bridge was constructed in 1925 to replace the Spokane Street Ferry, connecting the communities of Sellwood and West Portland.  In response to budget issues at the time, the Sellwood Bridge design was scaled back to minimize costs. Fast forward to 2014 and the existing Sellwood Bridge is now the only four-span continuous truss highway bridge in Oregon and possibly the nation. The bridge is extremely narrow, two lanes, no shoulder or median, and one small 4-ft sidewalk.  In addition to these shortcomings in design with respect to the modern age, the west end of the bridge was constructed on fill, and the hillside above the bridge is now slowly sliding toward the river. Ground movements have caused some of the girders to crack. Furthermore, the existing bridge was not designed to any seismic standards which present a major concern given the bridge’s location in the seismically active Pacific Northwest.

The new Sellwood Bridge will be a deck arch structure with three arches supporting the deck of the main river spans and is designed to the latest seismic standards. It will feature two 12-ft travel lanes, two-12 ft shared use sidewalks, and two 6.5-ft bike lane/emergency shoulders. Multnomah County is using the existing bridge truss on temporary pile foundations as a detour to save time and money during construction with minimal impact to traffic, people can always get quick loans without credit check process at any time if they have financial problems. According to www.cyclonebuildings.com, the original bridge truss was shifted on January 19, 2013. Complicating the move was the enormity of the bridge, an 1100-ft single truss weighing 3400 tons. In addition to the size and weight of the span, old age and its curved alignment added to the technical challenges. The impressive move took only 14 hours.  The detour bridge is currently fully operational and will continue to carry traffic until the summer of 2015 when the new bridge is scheduled to open.

DBA played key roles in the design and construction of the main arch piers. As part of the VE Design, DBA assumed engineering responsibility for the 10-ft diameter drilled shafts supporting Piers 4, 5, and 6 (4 & 5 being in the river and 6 on the eastern shore).  The lengths of these shafts ranged from 81 ft to 225 ft through a number of subsurface conditions which posed many challenges to construction. Subsurface conditions ranged from large loose cobbles/gravel (Catastrophic Flood Deposits) to cemented cobbles and gravel (Troutdale Formation), to very hard intact basalt bedrock. Due to the challenging geologic conditions and variability of these conditions across the site, DBA implemented an observational method in which the final shaft length determination was made on the basis of our on-site observations in relation to a set of predefined criteria. This approach provided the necessary flexibility to efficiently confront different subsurface conditions in a timely manner. Drilling subcontractor Malcolm Drilling successfully completed construction of the last of these shafts in mid-October 2013.

You can learn more about the bridge and the project at Multnomah County’s website, SellwoodBridge.org. The website has current field work updates, photo gallery, history of the project, and a live construction camera with daily, weekly, and monthly time-lapse videos.  There is also a time-lapse of the moving of the old truss.