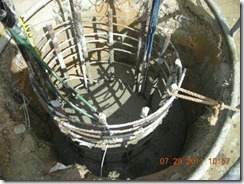 The report for the ADSC Southeast Chapter Lawrenceville, Georgia Test Site is complete and published (link below).

This is the second report from their research project on rock-socketed drilled shafts in the Southeast U.S.  This report is from the Lawrenceville, Georgia test site where shafts constructed in metamorphic rock of the Piedmont geologic province were load tested using the O-Cell load test device.  The report link is below.  Additional information about the test site can be found at the Lawrenceville Site Page.

Both reports will be the feature of a paper and presentation by Robert at the 2012 ADSC Expo, March 13-17, in San Antonio, TX. More information about the Expo can be found here.