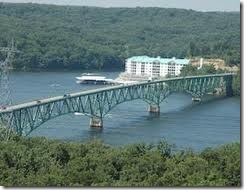 DBA is part of a team led by Parsons Transportation Group that was selected to design the replacement of the Hurricane Deck Bridge over The Lake of the Ozarks in Camden County Missouri.  MoDOT has awarded the design contract to Parsons. DBA will be the lead geotechnical engineer with Terracon on the team providing drilling and laboratory services, as well as some foundation engineering support services.  Parsons was chosen due to the innovative approach the team proposed that includes reusing the existing piers (from ENR.com):

MoDOT chose Parsons for proposing an innovative approach to construction that involves the use of temporary pier widening and shifting the existing superstructure over. This method will allow traffic to be maintained on the existing bridge while the new bridge is constructed, potentially resulting in significant cost savings.

A little history of the bridge can be found at Go2Lakeofthe Ozarks.com, including how it got its name:

Hurricane Deck Bridge of Ozarks crosses the main channel of the lake of approximately mile marker 35. It carries Missouri highway 5 between Versailles and Camdenton. It was built in 1936 –five years after the lake filled. It was named as Hurricane Deck because it was heard that a tornado struck that area which was locally "Hurricanes". It is a nautical term associated with river steamboats. The Hurricane Deck was the uppermost deck which provides and allows everyone to experience the pleasant breezy place and the passing scenery.