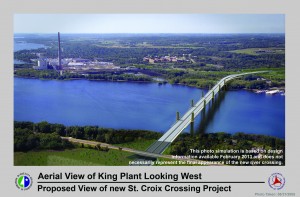 Earlier this week, officials from the Minnesota and Wisconsin departments of transportation (MnDOT and WisDOT) met for an official groundbreaking ceremony on the projected $629 million bridge and highway project that will connect Oak Park Heights, Minnesota, to St. Joseph, Wisconsin, just south of Stillwater, Minnesota, as highlighted in yesterday’s edition of The Minneapolis St. Paul Business Journal.  The new bridge will replace the 80-year-old Stillwater Lift Bridge and relieve traffic congestion in nearby Stillwater.

DBA has been retained by MnDOT as the lead geotechnical consultant and foundation designer for the extradosed river bridge.  Last summer, DBA aided MnDOT in the design and oversight of a load test program described in my blog post, “DBA Wraps Up Load Test Program and Proceeds with Design on St. Croix Bridge.”  Following final design, which took place over the fall and winter, construction of the foundations will begin next week with the installation of a technique shaft.  DBA will participate in construction as well, providing construction observation and review of the technique shaft and at least one shaft at each of the five production piers.  Edward Kraemer & Sons, Inc. of Plain, Wisconsin, has been selected as the general contractor for the foundation contract with sub-contractor Case Foundation Company of Chicago, Illinois, performing the drilling.  The extradosed bridge will feature five main river towers, each resting on two footings supported by a 4-shaft group of 8.5-foot drilled shafts, socketed 25-feet or more into sandstone bedrock.

I hope to have some more updates soon with some pictures following my upcoming site visits to observe the construction operations.  In the mean time, you can stay updated by visiting the MnDOT project page and watching the “action” live via the construction webcam.