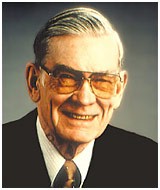 Ralph B. Peck, Professor Emeritus of Foundation Engineering at the University of Illinois at Urbana-Champaign died of congestive heart failure on February 18, 2008, at his home in Albuquerque, New Mexico. He was born in Winnipeg, Canada, to his American parents, Orwin K and Ethel Huyck Peck on June 23, 1912.

Ralph Peck earned a Civil Engineering Degree in 1934 and Doctor of Civil Engineering Degree in 1937, both from Rensselaer Polytechnic Institute in Troy, New York. In 1938-39 he attended the Soil Mechanics course at Harvard University and was a laboratory assistant to Arthur Casagrande. From 1939 to 1942 Peck was an assistant subway engineer for the City of Chicago, representing Karl Terzaghi who was a consultant on the Chicago Subway Project. He joined the University of Illinois in 1942, and was a Professor of Foundation Engineering from 1948 to 1974. Since 1974, Professor Peck was a Professor Emeritus at the University of Illinois, and a consultant in geotechnical engineering.

In 1942, Dr. Peck joined the Civil Engineering Department of the University of Illinois, where he remained as a teacher and mentor until his retirement as Professor Emeritus in 1974. After moving to Albuquerque, Dr. Peck continued his active consulting practice which included jobs in forty-four states in the USA and twenty-eight countries on five continents. His more than one thousand consulting projects include: the rapid transit systems in Chicago, San Francisco, and Washington; the Alaskan Pipeline System; the James Bay Project in Quebec; and the Dead Sea dikes. He authored over 250 technical publications, and served as the President of the International Society of Soil Mechanics and Foundation Engineering from 1969 to 1973. In 1974, he was awarded the National Medal of Science by President Ford. A few of his many honors include the Norman Medal, The Wellington Prize, and the Outstanding Lifetime Achievement Award in Education from the American Society of Engineers. His last project was the Rion-Antirion Bridge in Greece. It received the ASCE’s OPAL Outstanding Civil Engineering Award for 2005, and is the only project outside the United States to be so honored.

In lieu of flowers, contributions can be made to: Ralph B. Peck Geotechnical Engineering Fund Univ. of Illinois Foundation 1305 West Green Street, MC-386 Urbana, Illinois, 61801.

A publication on his life and works by the Norwegian Geotechnical Institute is here.

The recently published book on Dr. Peck, Ralph B. Peck – Educator and Engineer – The Essence of the Man, by John Dunnicliff and Nancy Peck young, can be found at the ASCE Bookstore.