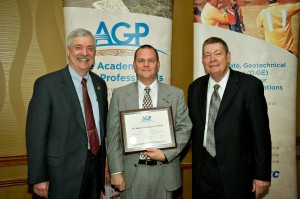 We here at DBA would like to say Congratulations! to Robert Thompson for receiving the specialty certification Diplomate, Geotechnical Engineering (D.GE) from The Academy of Geo-Professionals (AGP).  Robert received the certification at the recent Geo-Institute’s Annual Conference, GeoFrontiers, in Dallas, Texas.  The excerpt below comes from the AGP web site.  Robert is on the bottom row, second-to-last on the right.

AGP’s latest ceremony was held in conjunction with Geo-Institute’s Annual Conference, GeoFrontiers, in Dallas, Texas on March 13th at 7:00 PM Central. The ceremony, which was the Academy’s fifth, was the first held 2011. About 25 Diplomates were in attendance at this event, bringing the total number of Diplomates to over 200!